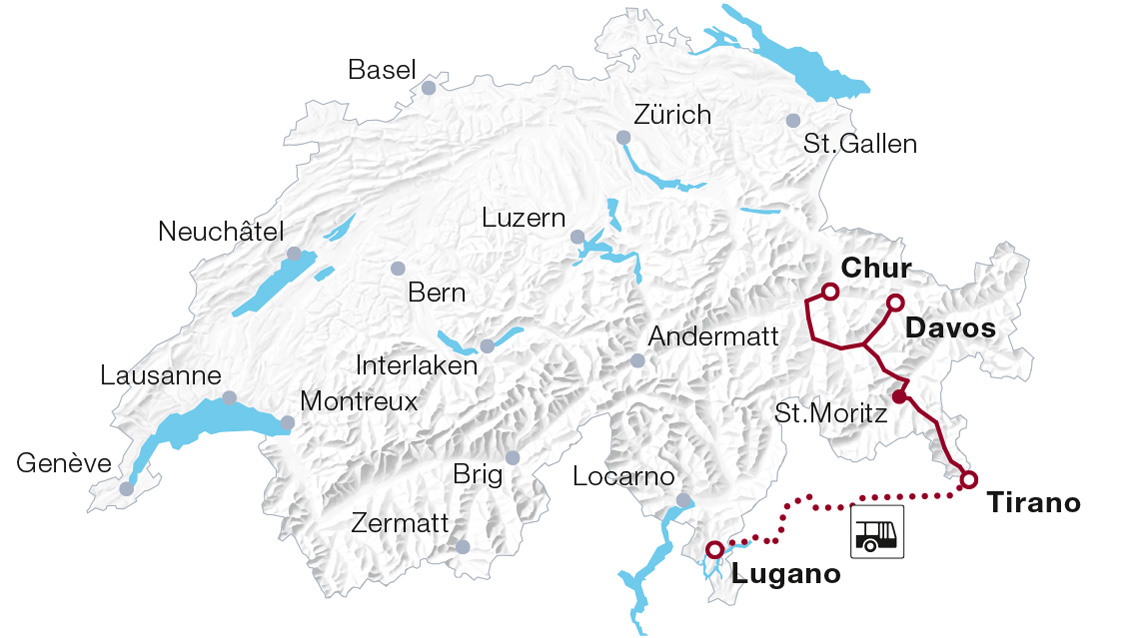 This premium panoramic train connects the north of Europe to its south – leading right through the UNESCO World Heritage Site of the Rhaetian Railways. Without a hitch, the bright red train masters every ascent, offering unrivalled views not only of mountains and glaciers but also of palm trees.

Crossing the Alps in the Bernina Express certainly is one of the most spectacular ways to do it. Along the way, the Bernina Express rolls Hollywood-style over the 65-metre-high Landwasser Viaduct, the signature structure of the Rhaetian Railway and the UNESCO World Heritage site.

Altogether the train passes through 55 tunnels and over 196 bridges on its way from Chur to Tirano. Travellers are treated to marvellous sights during their journey, like the Montebello curve with a view of the Bernina massif, the Morteratsch glacier, the three lakes Lej Pitschen, Lej Nair and Lago Bianco, the Alp Grüm and the Brusio Circular Viaduct.

In summer, the journey can be extended from Tirano to Lugano aboard the Bernina Express bus.

Facilities on the train

Year-round operation between Chur and St. Moritz and to Tirano. From March to November, additional operation of the Bernina Express Bus between Tirano and Lugano.

On 3 June 1973, the first Bernina Express train tackled the legendary Albula and Bernina Line. Since then, roughly 10 million guests have enjoyed the comfortable panoramic coaches. In 2023, the Rhaetian Railways are celebrating their 50th anniversary with various jubilee events.

Welcome aboard! The Swiss Travel System Excellence Program is the e-learning platform for future Swiss public transport experts. Heidi and Peter take trade specialists on a virtual learning journey through Swiss public transport. In the process, agents can broaden their knowledge in an entertaining way and acquire essential public transport know-how to support their clients professionally and competently.

Our regular newsletter for the travel trade industry contains the latest sales and product updates regarding Swiss Travel System. Sign up and receive our newsletter four times a year!